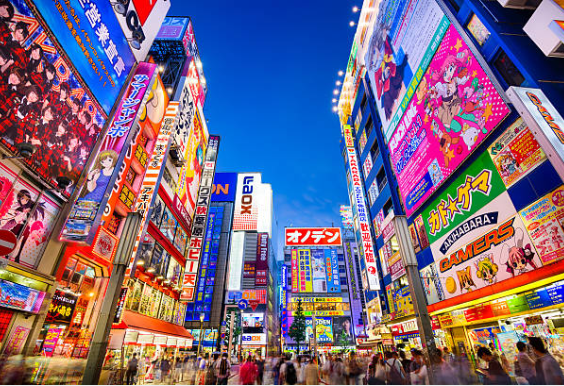 Anime is an obsession all around the world and it is nowhere stopping. Collecting Anime figures and finding rare figures can be difficult. But there are thousands of anime options available that will help you collect your favorite anime figure.

There are some trustworthy stores that sell authentic anime stuff that you can get for your collection.

Where to Buy Anime Figures Online

Here are some of the largest online and retail stores in japan and some shipping worldwide that have almost all the anime stuff that you are looking for.

They have merchandise for a variety of series, including My Hero Academia, Love Live!, Uta no Prince-Sama, and many others. The website is full of amazing things to buy, including action figures, jewelry, apparel, and DVDs, among other items.

The Animate Online Shop also has exclusive items that can only be purchased through Animate, so it’s definitely worth a look!. The good news is that Animate ships worldwide and also offers a proxy buying service to purchase off to here.

As they ship worldwide, Animate has an auto-translate option so that you can easily understand the context on the website. It includes languages from English, Russian, Chinese and many more. But one drawback for Animate is that they don’t have a variety of anime figures online as compared to their physical store. But still they have a lot of options online. Chances are that you’ll get your anime figure online. Animate is no doubt a must visit website if you prefer authentic products for your personal collection.

In Japan, their Akibara store is pretty famous as they have the largest inventory available there and you can find almost all anime figures that you’re looking for.

AmiAmi is one of the most well-known online manga and anime stores. Many anime fans are familiar with AmiAmi, which sells a wide variety of anime figures, sundries, plushies and other stuff. They have a few stores throughout Japan, as well as one in Hong Kong. The prices are all in Japanese yen, and shipping costs vary widely depending on where you live in the world.

The best part is that the website is updated on a daily basis and offers the best daily deals on practically anything! Although the user experience may not be as good as on some other websites, you can be sure that the things you receive are 100% genuine because they will be shipped directly from Japan.

If you’re looking to save money, AmiAmi also has a section dedicated to pre-owned figurines. You may easily preorder recent products as well as upcoming figurines on AmiAmi. AmiAmi rates the condition of each used figure, so you won’t be caught off guard by any major defects.

Surugaya is very popular in Japan and known for its best prices when buying anime figures from them. One option that resembles AmiAmi and Surugaya is the pre-loved anime option.

Surugaya is known for its large area dedicated to tens of thousands of used anime items. Surugaya allows customers to place pre-orders for items that have yet to be released.

They accept pre-orders for items that have not yet been released. There are a lot of unique items here that you won’t find anywhere else! Suruga-ya may eventually appear if there’s something elusive on your wish list. It’s important to keep in mind when browsing Surugaya that they occasionally have the same item in both new and used condition.

Solaris Japan is an amazing website that sells a variety of anime products, with a focus on figures and exclusive merch as well. Solaris has a large number of figures and figure types are also available on the website. Solaris Japan is a great place to go if you’re looking for affordable figures.

Miniatures from all kinds of shows are available, from classics like Berserk to more recent shows like Demon Slayer. Solaris Japan’s extensive collection of upcoming figures allows die-hard collectors to pre-order their favorites.

Solaris Japan offers early bird discounts that are available if you place your order early enough. If you’re looking for cheap anime figures, Solaris japan has all what you need.

Just like other websites, Solaris Japan has separate sections of the website are dedicated to used anime figures with defective or missing parts, so you know exactly what you’re getting before you buy.

Mandarake is a well-known Japanese store that focuses on selling second-hand anime goods. Not only action figures, Mandarake has some special and exclusive stuff for anime lovers that you might have never heard of! They’re known for having a large selection of vintage anime and manga items.

The Mandarake store in Tokyo’s popular Akihabara district has an impressive eight floors of merchandise ranging from cosplay to retro games! It is one of Japan’s largest anime and used game store chains, and it is very popular with both anime fans and tourists.

You’ll be able to take a lot of really good photos when you visit these businesses because they’re so well-decorated. As a result, Mandarake will appeal to models and photographers.

If you want to get your hands on some rare items, go to their Japanese site instead of their English site, as the English site has a smaller selection. Mandarake began in 1987 with a storefront on Nakano Broadway that is still operational today.

It is a store located in Somerset, Wisconsin (United States). BigBadToyStore is one of the top sellers of comics and anime-related products. The amazing thing is that they ship internationally.

The store has everything from top-quality anime statues and Marvel Comic action figures. The most appealing feature of BigBadToyStore is that they cost you only for the item delivered to your address, unlike other stores.

Akiba Soul is a website that specializes in Anime figures and other anime-related products. They are located in USA and they ship anywhere within the United States of America and they also ship internationally.

Akiba Soul has a huge collection of all the latest Japanese anime figures, which includes your favorite past as well as current anime series. The Anime figures are of high quality and are all authentic and their prices are very reasonable too.

Akiba Soul offers free shipping for US customers with a minimum purchase amount, so you can save even more money if you purchase more than one product from them. Their customer service is superb too where they answer any questions that the customer may have on the products or order status.

They also offer goods from other countries such as South Korea, Taiwan etc so if you want to get any Anime related product from Japan or elsewhere, Akiba Soul is a great place to start looking for it.

Crunchyroll ​ is one of the most popular sites for watching and buying Anime Figures online.  The headquarter of this store located in San Fransico, with offices in paris, berlin and many more. The site is free to use but in case you want to get access to their premium membership, then it costs $6.95 per month.

The site offers a wide variety of products ranging from shirts to posters as well as Anime Figures. It is also known as one of the largest community hubs dealing with Anime culture where you can interact with other people who share similar interests as yours such as watching Anime Figures or reading Manga (Japanese comics).

It is a US Based company  to buy anime figure .The quality  of anime figures is amazing. The detailing on each of their figures is impeccable, and you can almost always tell when you’re looking at a GSC figure.

The price tag is pretty good too! If you’re wondering where we get our figures from, the answer is overwhelmingly GSC (the others are Kotobukiya and Max Factory). And while it can be tempting to look for a cheaper option when buying an anime figure online, in this case it really is better to go to the source.

Galactic Toys & Collectibles has a great selection of anime figures at very reasonable prices. There are a ton of detailed and colorful figures to choose from and you can get free shipping on orders over $50 in the United States. They also ship internationally but this will cost extra. You can use their store locator to find out if they have a physical store near you, or you can order items online, which may be more convenient. Galactic Toys & Collectibles has excellent customer service and usually ships within 48 hours after you place your order, so your figure should arrive very quickly.

They do offer an affiliate program that allows users who have websites or blogs to promote products on their site. You will receive a percentage of the revenue any items bought through your post generate and it’s very easy to set up an account with them as well as start selling your favorite products.

The only downside is that there is no way for customers who bought something through one link and then come back again later with another referral link (often called cookie stacking).

Why anime is so popular all around the world?

Some fans may look at the abundance of cute anime girls and assume that it’s just a fad, but that’s simply not the case.  The anime industry is continuing its rapid growth, with new companies sprouting up all over the globe as well as older ones expanding their market to include more foreign audiences.

What many don’t realize is that anime characters have been depicted in other forms for a long time: from Japanese folkloric theater to textbook illustrations to hanafuda cards, characters have long been used to spread culture and share stories over distances.

They’re also shown in installments for every day use, such as advertising on posters or magazine ads, so they’re very familiar to people around the world.

Along with their pop culture status is their role as emblems of strength and power: Shinto are often modeled after them; symbols like the kanji character “ki” (strength) take on great meaning; and pro-wrestlers make use of them to symbolize their self-esteem while mat wrestling.

Top 10 Cancer Hospitals in the World

5 Ways to Do Online Marketing » Webnews21